'What Alpha offers, and what is attracting thousands of people, is permission, rare in secular culture, to discuss the big questions: life and death and their meaning.'   The Guardian

Alpha has around 10 sessions. It includes supper, a short talk and a discussion where you can share your thoughts.

The Alpha Course is for everyone, a place to meet new people and have serious discussions. You are welcome to come to the first sessions and see what you think with no commitment required.

Why Alpha helped me

I had been attending services at church for about 2 years with my family, when our vicar invited me to an Alpha course. It wasn't something that I had considered doing, I really didn't know what it was about. I had seen posters outside churches, but never inquired. I probably would never have gone if I wasn't asked. I was explained to me that it would be an opportunity to understand what Christians believe, and ask questions in an environment where no question was considered silly. This appealed to me as there was a lot that I didn't understand about Christianity and maybe I would learn something.

It wasn't a massive commitment. One evening a week for about 10 weeks and a weekend away. I really wanted to get the most out of the course, and made every effort to attend all of the sessions. Each session started with a meal at the house of the hosts, then listening to a guest speaker on a particular topic. The talks and the discussions that followed certainly helped me to increase my understanding of Christianity and encourage me on my journey of faith.

The weekend away (the Holy Spirit weekend) was a real eye opener. During this weekend I realised how little I knew about the Holy Spirit (I don't think I really knew what it was) and the affect it can have on peoples lives. At the time it did seem rather extreme, but this was all new to me, and not the sort of thing I had ever seen in church before, with so many people being moved.

Having completed the course, I found the readings and sermons at church had more meaning, and I could relate back to elements of the course that we had studied. I even wanted to buy a bible, something I had never done before.

I think our vicar could see how I had benefited from the course and asked me if I had considered confirmation. This seemed to be the natural progression, and a few months later I was confirmed. That was twelve years ago now, and I have done another Alpha course since. My journey is still continuing. I still have much more to learn, and my appetite to learn has increased. Just going to church services on Sunday isn't enough, and I regularly attend a home group to learn more. I know God has changed me from the person I was before I decided to accept him into my life. Taking part in the Alpha course helped me to understand why.

Before I started on Alpha I thought that God was a nice concept, but did not really believe He existed.  To me, God was a bit like father christmas.  I thought that to believe in God, it would take blind, unquestioning faith against all the odds. I also thought that even if God does exist, I could never be well behaved enough to be a Christian.

Two weeks later, the Alpha course was starting and I was invited along. I still had lots of questions and wondered whether God was real. The Alpha course was great because it explained who Jesus is, and also  looked at all the historical evidence for the accuracy of what was written about him. It was a friendly, un-pressurised course, where I was not afraid to ask questions. Through Alpha I came to believe in Jesus and I found faith in my heart which enabled me to have a faith that is not simply a blind faith but my intellect is also fully engaged. People around me noticed a difference in me and I feel different inside no matter what life throws my way. Before, the bible seemed like the most boring book full of nice quotes which I would never want to pick up, but now I love reading it. 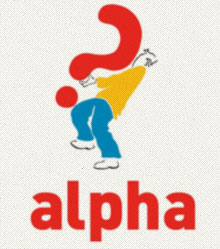